There is nothing like going out to experience the strength of the ocean. Tom Morey certainly knows this. He is a true inventor. Before the amazing innovation that would make him famous, Morey owned a surf shop where he fixed and created surfboards.1 He was by no means rich. In fact, at one point he had an itch to go surfing and feel the pull of the waves, but had no board and no money. His wife was pregnant, and times were hard. So, he took some of the shop’s leftover supplies and put them together.

In 1971, he cut his last foam board in half and covered it with newspaper. He then proceeded to create the first bodyboard using a hot iron and an electric knife.9 Morey realized he could shape the plastic if he used newspaper to cover it. This would stop it from becoming burnt or melting too quickly. As a result of the newspaper, the board was covered in words from the ink bleeding into the foam.2 Interestingly enough, the body board’s other moniker, “boogieboard”, originates from Tom Morey because he is passionate about boogie music.2

Bodyboards started off as simplistic foam boards, but soon gained traction. In the forty-five years since that time, bodyboarding has become a true art. Before the Mach 7, boards were rough pieces of foam, but the Mach 7 introduced a new concept—the slicked bottom. This helped the boards glide easier through the water, making it faster and easier to maneuver. Over the decades, boards have slowly become fine tuned as technology advances. Now, the core can be made of more complex materials. Instead of a pure foam board, there are often other substances used. Today the Mach 7 is still being sold, and reviewers continue to say positive things about it.

This board is definitely an excellent choice for those who are looking for a classic, sturdy board. Although lightweight, it can endure harsh conditions.

Many boards begin to fall apart after a few sessions, but the Mach 7 can hold its own. But not only is it durable, it is extremely comfortable.

With the picture on the right, you will see a current Mach 7 produced today, stocked on shelves and ready for purchase! When it came to the resurrection of Mach 7 line, Morey didn’t forget the SS.

This is a very versatile board, great for both prone and dropknee. It is perfect for the well rounded rider.

It features knee contours on both sides (meant for dropknee riding) as well as raised nose bulbs for grip (on each corner at the nose, where yours hands go).

The History Of The Mach 7

No question about it, the Mach 7 is a major part of bodyboard history. The Mach 7-7 is definitely the most iconic boogie board. There are actually three generations of the original Mach 7-7, each slightly improved on the last. The first featured an ion slick bottom, and the last two also featured a crescent tail.4 Because of the wide success of these first editions, Morey Boogie has continued to release different versions of the Mach 7 over the years.

It was truly revolutionary when the Ion Slick Bottom was released. Unlike earlier boards, this one featured a smooth bottom. With less drag, it became much faster. It had 70/30 rails. However, it had a slight problem. The first generation featured a black bottom, which was prone to bubbling.5 The second generation Mach 7-7 changed the bubbling problem with an orange bottom and black stripes that became world recognized. In addition to having the slick bottom, it also had a crescent tail, helping it to be even more versatile and smooth. There was the new power rod stringer, helping the board to glide. Also, the second generation was different in that it possessed 60/40 rails.5 The third generation of the Mach 7-7 similarly had 60/40 rails and an orange bottom. The stripes, however, were replaced by a logo.5 This board is perfect for drop kneeing since the large grips help the board to be extra buoyant. The general shape is similar to previous Mach 7 designs, with the familiar slick bottom and crescent tail. However, it has a double stringer instead of a single. There is also a 50/50 rail. 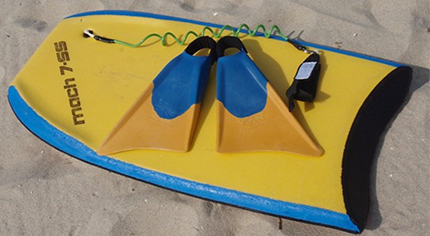 Like the Mach 7 SS first generation board, the second generation also provided a way to hold on to the board. Instead of large rail grips, there was a groove alongside the chimes. It still had a 50/50 rail. As the name suggests, this board was designed by Jay Reale, a well known rider in the 1990s.5 A surprising fact is that Reale was actually from the United States mainland, unlike a large number of big time bodyboarders.7 In fact, he is popular for his drop kneeing. For this board, he changed the original design’s wide point to be more user-friendly for prone riders and tweaked the nose to have a thumb grip groove. This Grip Track Nose allowed for better control of the board from the front. 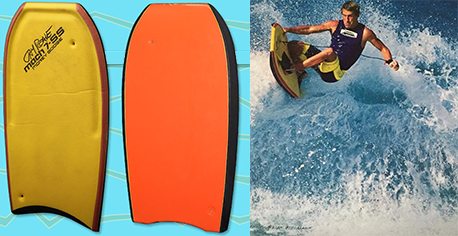 Reale came back to design the second generation Morey Jay Reale Mach 7 SS, changing a few things. This generation featured a slightly shorter board, and the nose was drawn in for better drop knee riding. Again, it had the Grip Track Nose along the front.

For this board, Tom Morey himself created a system that consisted of rubber mesh.5   He called it the X-Flex Core. The main idea was to provide better flexibility, easier responses, and greater projection. This board had 60/40 rails. This board was quite different from other Mach 7 models for one reason: its color. Many of the Mach 7 boards featured yellow decks, black rails, and orange bottoms. However, this board was completely black. Like the first generation, it possessed a clipped crescent tail. Even today, the Morey 7 continues to be a popular hit. Truly, it can be called nothing other than a classic. What is most surprising about the bodyboard is its humble beginnings. Millions of people have ridden one. However, the whole movement started with a piece of foam and throw away newspaper. It just goes to show that you never know what invention will take over. The whole water sports industry was changed with the simplest of materials. Tom Morey could never have guessed that his name would be on millions of products at beaches around the world. One of the greatest things about Tom Morey is that he is not just the inventor of bodyboards, he is also a musician and writer.6 Not only that, but before he ever made the first “Boogieboard,” he created many surfboard customizations. Morey did not just follow one passion and then back down when he succeeded. He continues to be passionate about many things, including the ocean, spirituality and music. The man is the sort of dreamer the world needs today.